We often end up making recipes that involve sweet potatoes; they usually end up as breakfast recipes. However this particular recipe was for a savory dinner. The addition of mung beans intrigued us even further as to how that final flavor would turn out. The first two parts of the recipe were easy enough, bake the sweet potatoes and cook the mung beans.

But then it came time to add the spices and we hit a temporary wall. The recipe called for garam masala and we had no idea what that was.

So, we took to the internet to investigate and discovered that it's the quintessential Indian spice mix. Its name actually translates to warm spice mix. We were surprised and delighted to discover that we had all of the spices required for the mix in our own kitchen and no wheat based flour were required to make it.

We were really excited to try these sweet potato Tikka Masala patties knowing that we were going to use some of our favorite spices. They didn't disappoint they were sweet and savory, not to dense but a little softer then expected. It could possibly be the addition of the mung beans, which we think were meant to act as a binding agent, holding together the sweet potato. The mung beans themselves mostly disappeared into the flavor of the sweet potatoes and the garam masala mix, but its definitely a recipe we will make again. With maybe a small tweak so that we can get a firmer texture to the patties.

If you give this gluten-free vegan recipe a try, let us know! Leave a comment, or take a picture and tag and us on Instagram #thevgnway. 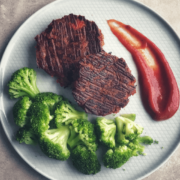 Print
No ratings yet