If your looking to try a meat-free Monday or one pan plant-based meal, eggplant makes a great switch from the traditional chicken cacciatore. We definitely weren't the biggest fans of eggplant, it can sometimes have a slightly bitter taste. And if you have ever tried using an eggplant in a recipe you know that they can be temperamental. Even if you're simply sauteing them lightly and putting them into a salad you still have to deal with there unusual rubbery texture. And if they cook too fast they can become soft and mushy. But if paired with the right ingredients they can actually turn out really delicious.

We've actually tried this eggplant cacciatore recipe a few times in order to get it just right and that's including trying to find a good gluten free and vegan baguette. At one point we used pizza dough and let it sit for several days as it's swelled from the yeast and then shaped it into bread rolls. Ultimately once we got the recipe down to a science we really we're able to enjoy the flavor of the eggplant and tomatoes.

For our vegan eggplant cacciatore we added a twist to the classic recipe and used Alfredo sauce. Anyone who has had vegan cheeses knows these plant-based cheeses can be stubborn when it comes to melting. We did try a classic version with provolone too but really liked the cashew based Alfredo sauce. We used a store-bought brand of plant-based sauce. And we do intend to create our own homemade alfredo sauce and then try it with this recipe. Along with the garlic infused baguette we got a deep roasted and hearty flavorful meal.

In this preparation we used MyBread Gluten Free Bakery baguette for the sandwiches. Try it with our gluten-free onion rings. 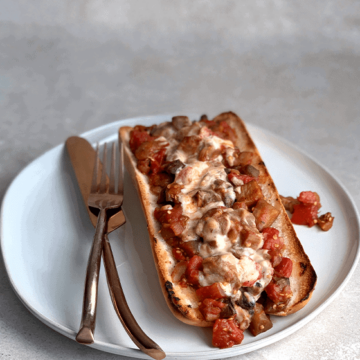 If you give this gluten free vegan recipe a try, let us know! Leave a comment, or take a picture and tag and us on Instagram #thevgnway.

More recipes you may enjoy