Are Mushrooms A Good Source Of Protein?

Adding black beans is a great protein boost for this recipe.

What Is A Serving Size Of Portobello Mushrooms?

We calculate 2 to 3 mushrooms for each individual servings depending on size of mushroom and hunger level.

One cup (~3oz) of mushrooms is considered a typical serving size according to WebMd. Large portobello caps can range from approximately 2.5 oz to 6 oz.

What Are The Health Benefits Of Eating Portobello Mushrooms?

They are low in calories, high in potassium, a good source of copper, niacin (B3) and if grown under UV light good for vitamin D. Mushrooms are the only vegan, non-fortified dietary source of vitamin D.

Yes, they make a great substitute because of the rich umami flavor they have and a texture that is similar to animal protein. Did you know technically mushrooms are not a vegetable; they belong to the fungi kingdom. Although they are not vegetables, mushrooms provide several important nutrients.

Mushrooms make a great “meaty” substitute for beef. Roasting them along with the onions and peppers during the roasting process; transforms them into a super savory selection.

Drizzle the marinade over the veggies. Use both hands to toss the vegetables until evenly coated mixture.

Spread vegetables out evenly, do not crowd pan (a crowded pan can lead to steamed veggies instead of nicely caramelized roasted veggies).

Roast mixture for about 20 minutes or until the vegetables have a nice golden color.

Serve with tortillas, sliced avocado, squeeze of fresh lime juice over top and a dollop of vegan sour cream.

How To Julienne A Bell Pepper

Simply remove the top and bottom of pepper

Cut the pepper open. Run the blade along the inner edge of the pepper to remove seeds.

Flatten pepper with finger and begin julienning it.

Can I Make This A Vegan Chili's Mushroom Jack Fajita

This can easily be transformed into a copycat Chili's Mushroom Jack dish that's vegan, vegetarian, gluten-free and allergen friendly. Add the following ingredients:

Store in an airtight container with lid for up to a 3/4 days.

Looking For Other Vegan Gluten-Free Mexican Inspired Recipes? Try These Out: 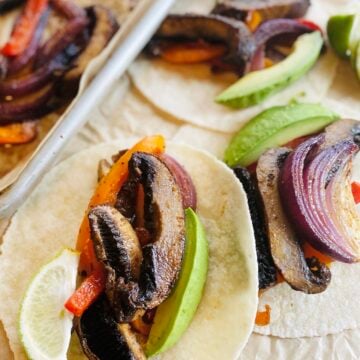 Pin This Recipe For Later!

If you give this vegan mushroom fajitas recipe a try, let us know! Leave a comment, or take a picture and tag and us on Instagram at #thevgnway

And be sure to check out more of our quick and easy plant-based recipes on www.thevgnway.com