This Oreo Cheesecake is so delicious, baked in an Oreo crust; so easy to make no one will even believe its vegan and gluten free.

Vegan Cheesecake is easy enough to make with recipes variations that include plant-based cream cheese, sour cream and cashew bases. But the one thing that has eluded gluten-free vegans until now is the Oreo cheesecake.

Are Oreo's vegan and dairy free?

Oreos haven’t always been vegan. The journey to vegan & gluten-free Oreos is long and whining.

But long story short in January 2006, Oreo replaced the trans fat in the cookies with non-hydrogenated oils. However, the recipe included whey protein, which is derived from dairy. When the whey protein was removed, the cookies finally became vegan on Feb 2, 2014.

On January 21, 2021 Nabisco released a gluten-free version of the cookie making the classic chocolate sandwich cookie vegan and gluten-free. Sidenote, Oreos are produced in a factory that makes cookies with dairy and for some this may mean they are not suitable for consumption.

Gluten-free Oreos are certified GFCO gluten-free and are made from a mix of white rice, tapioca, cornstarch, gluten free whole oat flour's and starches

What Is Vegan Cheesecake Made From?

How long will this cheesecake keep for?

This cheesecake is perfect for making in advance and freezing for later. Wrap well before freezing and thaw overnight in the refrigerator before serving. We’ve frozen up to a month in advance 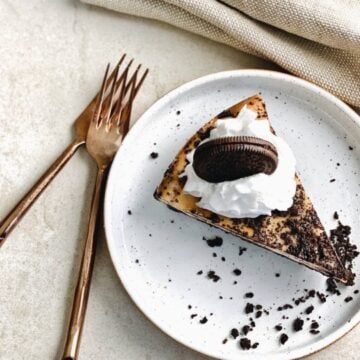 If you give this vegan gluten-free Oreo cheesecake recipe a try, let us know! Leave a comment, or take a picture and tag and us on Instagram at #thevgnway

And be sure to check out more of our quick and easy plant-based recipes on www.thevgnway.com