These high protein waffles; made from chickpea flour, are everything you want and need in a vegan gluten-free waffle. These homemade waffles are simple to make. Can be made right away or frozen for later. Moist, fluffy and delicious

To be completely honest we're serious carboholics. We've struggled with making a lot of breakfast recipes because of that. Pancakes, waffles, biscuits, had all been our breakfast of choice. But carbs aren't a great way to start your day. And when you cut out meat and wheat, your options appear to get very limited.

Shad has been really pushing me to get into some savory, non-traditional items for breakfast. We had been playing around with chickpea flour, making tofu, adding it to our cornbread. Then it hit us. "Let's incorporate it into our waffle mix." A win-win. Vegan, gluten-free, and high protein for breakfast.

Why these sweet Chickpea waffles are the best:

Can Waffles Be Gluten-free And Egg-free?

Can I Make In Advance & Freeze?

Yes, these waffles are perfect for making in advance and freezing for later. We’ve frozen up to a month or two in advance. To reheat simple remove from freeze and microwave for a few minutes.

Belgium Waffler Maker - Belgian waffles are thicker and often larger than regular waffles because they are made with waffle irons with deeper grids. They are thicker on the outside. A traditional waffle is usually thinner and denser. Belgian waffles have deep pockets, whereas regular waffles have smaller pockets. We think you use less maple syrup because of these deeper pockets you don’t lose a lot of syrup to your plate. 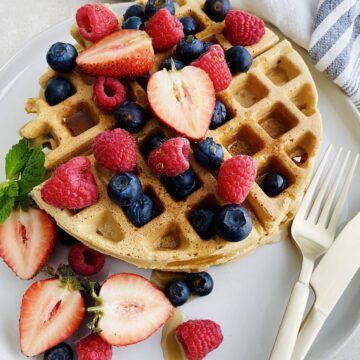 If you give this gluten free vegan waffle recipe a try, let us know! Leave a comment, or take a picture and tag and us on Instagram #thevgnway.

And be sure to check out more of our plant-based gluten-free breakfast recipes on www.thevgnway.com