A Full Proper Vegan English Breakfast With Gluten-Free Toast. A Guide To A Semi-Homemade Fry 'Em Up. A Substantial Meal That Can Be Enjoyed Anytime Of The Day. Breakfast For Dinner Anyone? An Easy And Quick Protein-Centric Cooked Breakfast.

Full Recipe Ingredients/Instructions for this semi homemade vegan full english brekkie are available in the recipe card at the bottom of the post. However you can find important tips/tricks in the post like how to store and substitutes.

What Is A Full English Breakfast?

“A full breakfast (also full english) is a substantial cooked breakfast meal served in the United Kingdom and Ireland, that typically includes bacon, sausage, eggs, Black pudding, baked beans, tomatoes, mushrooms, toast, and a beverage such as coffee or tea” via wikipedia.

An english breakfast is also referred to as a vegan “fry up" in most areas of Great Britain which completely makes sense because that’s exactly what this cooked vegan breakfast is, fried. We cheated a little and baked the sausage and bacon to get everything on the breakfast table at pretty much the same time.

This hearty english fry up recipe is completely plant based and gluten-free but honestly we wouldn’t refer to this as a healthy breakfast as the calorie count is high; and nearly everything is fried, we consider this cooked breakfast more our weekend splurge, or our cheat meal for the week. Fried sausage and bacon is still fried sausage and bacon right. But every now and then a splurge is fine.

Preheat oven to prepare vegan bacon and sausage according to package directions.

In a medium frying pan on medium heat. Add olive oil, cook mushrooms with tomatoes. Cook until slightly crispy on the outside.

In other pan (nonstick is preferable) cook the vegan fried egg according to package directions.

On there own a little flavorless, but the yolk has hints of egg flavor. It's a little chewy but works great in this recipe with all the other flavors. Would buy again just be sure to season or use in a flavorful dish.

Substitutions You Can Make

The vegan fried eggs are best eaten within a day or two of cooking and don't refreeze well after cooking. 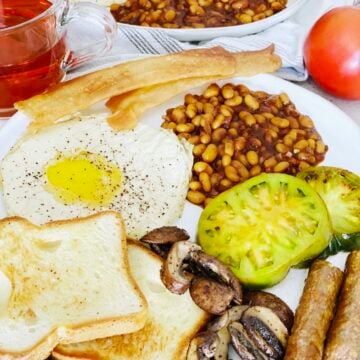 Pin This Recipe For Later!

This veganise english breakfast recipe is a hearty and high protein breakfast option. If you give this recipe and try please let us know! Leave a comment, or take a picture and tag us on Instagram at #thevgnway.

Be sure to check out more of our plant-based breakfast.

What questions do you have? Leave us your questions/comments below or on Instagram at #thevgnway.